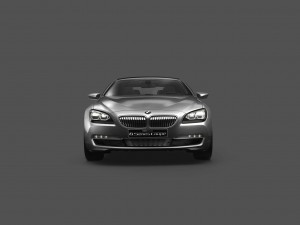 The BMW 6-Series concept debuts, as expected, at Paris Motor Show (2-17 October), this as final presentation before its upcoming market that will be in April 2011. The size of the new BMW 6 Series Concept are 4.82 mt long, 1.82 mt wide and 1.37 mt high, thanks to this size the cockpit is definitely good and the trunk has a capacity of 450 liters. The interior proportions shows a classic arc style and volumes seem more clearly separated. Lines are straight and enhance even more the big size, headlights with LED technology is also been introduced. The dashboard has a central part facing the driver, and dominated by a 10.2-inch screen for iDrive, but this time not protected by an upper eyelid. News also signed for the audio system with 16 speakers Bang & Oufsen, all protected by aluminum grille and controlled individually, the tweeter with telescopic pull-out, such as the Aston Martin and Audi. It also featured the head-up display.

The BMW has not released information on the engines, but since the platform is the same as 5 Series, 5 Series GT and 7 Series, it is plausible that shares these engines and transmissions. Engines 3.0-liter, 306 hp and 407 hp V8 with both Turbo and TwinPower HighPrecision Injection should be available at launch.