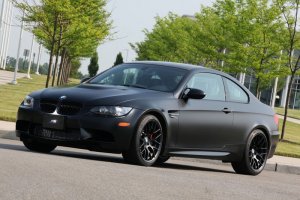 BMW announced the launch of a special edition of the M3, called Frozen Black Edition M3 Coupe, limited to 20 units exclusively for the American market at a price of $ 79,650 plus tax (about 55,400 euros). Bmw will deliver 19 units by the end of M3 in July 2011, while the latter will stay at BMW North America to be sold later.

DESIGN: the BMW Frozen Black Edition M3 Coupe, created to celebrate new tints “Frozen” opaque available with the Individual Program. The special body color, guaranteed by BMW and obtained by stretching a transparent opaque layer on a metallic black base. The body is then matt black and matches the wheels of the BMW M3 GTS blacks, while the interior features leather with red stitching, the carbon-fiber panels. This M3 Frozen Black also shows the red brake calipers and many painted black gloss exterior details.

ENGINE: a 4-liter V8 by 414 hp, the same as the Frozen Gray M3 coupe of last year, combined with the M DCT dual-clutch gearbox and the Competition Package which lowered the balance by 10 mm. The new special edition also comes with Electronic Damping Control, which improves road holding. The Frozen Black Edition M3 Coupe, according to data released by the German carmaker, accelerates from 0 to 100 km/h in 4.6 seconds.