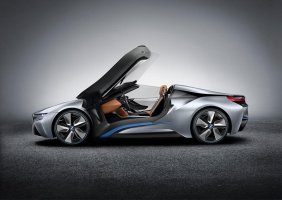 BMW i8 Spyder not just a dreamed supercar.

This BMW i8 Spyder concept will have a production variant of the petrol-electric hybrid supercar in 2014. Pricing is gonna be approximately £85,000. The third concept variant of the revolutionary supercar will be shown at the up-coming Beijing motor show.

This open-top concept includes solid doors, which substitute the transparent of the previous BMW i8 Spyder Concept. With its open-roof design, the i8 Spyder has a new, free-standing windscreen. door glazing and high aerodynamic drag thanks to the new kidney grille and the layered surfacing styling cure. The backside has been specifically modified, with a smooth, transparent engine cover.

The pure two-seat car features the identical plug-in hybrid system with a 1.5-litre three-cylinder turbo petrol engine – used by the BMW i8 coupé – combined to a front 130 bhp electric motor pushing the front wheels. All this make 350bhp and 406lb ft of torque.The BMW i8 Spyder powertrain can operate on electric power, petrol or with both and in combination with rear, front or four-wheel drive. The battery can get recharged in motion.

On the 0-60mph the supercar needs 5,0 sec while top speed is limited at 155mph. German car maker claims that the BMW i8 Spyder in the combined cycle can produce 94mpg along with an all-electric operation up to 20 miles.