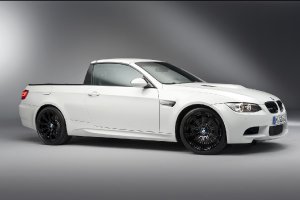 BWM has released the official pictures of the M3 concept pick-up, we do not know if  its designer had drunk a few pints of German Bavarian beer when have considered to propose a far-fetched fancy pick-up. In fact, it is also true that it’s hard to go unnoticed when you drive a powerful BMW M3 turned into a pick-up. First spy photos were taken by surprise when the BMW M3 truck ran on the Nürburgring, later it was caught outside the circuit, until the official presentation of its photos on first of April and do not take much to understand that this is an April Fool.. The truth on the curious Bavarian concept is a ingenious idea to bring attention around the press conference of the M division, near the long-awaited debut of the M5 on the market.

The BMW M3 Truck is a concept completely devoid of its top and seats in the rear section and even if showing off the camouflages which are usually affixed to the pre-series BMW cars, is excluded that such a concept come into future productions. The concept uses the same mechanical of other BMW M3, the 4.0-liter V8 with 420 hp rear-wheel drive combined with a manual gearbox with six speeds. It surprise the max load of this pick-up, according to leaks by BMW, by removing the cap – which weighs just 20 kg – you can stow up to 450 kg.

Next post: Alfa Romeo MiTo MY 2011 pricing and updates