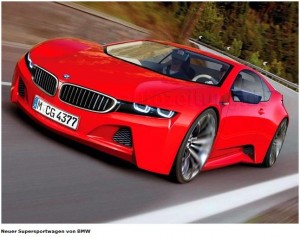 Rumors still surround news about a new supercar BMW called M8 and equipped with the latest hybrid technologies introduced by the German company.

A monster from about 600 hp just waiting the final green light from the executive floor of the BMW tower. To maintain low weight the car could be built on an aluminum frame with numerous body panels in carbon fiber, and there will be even seats made with Kevlar structure. The aim would be to not exceed 1500 kg.

The design is clearly inspired by the Vision EfficientDynamics Concept presented at the Frankfurt Motor Show last year. The M8 should have an internal hybrid configuration 2+2. For the combustion engine should be a revised version of the glorious V10 of the M5 E60.

But we think most likely the use of the twin-turbo V8 M5 F10, most suitable to the ecological spirit of the car. It is not clear yet what will be the whole engine position (but could take the one as seen on Vision EfficienDynamics Concept). Possibly debut scheduled for 2012 at a price in the order of 150,000 euros.