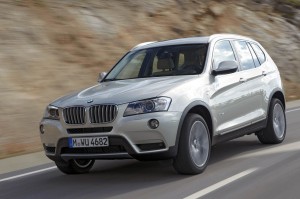 New restyling for the BMW X3 seven years after its first debut, few changes affect the aesthetics and more interesting are mechanical.

The model has a xDrive four-wheel drive with 40/60 distribution of torque between the two axles under standard conditions, and up to 100% in situations of low grip on the ground. In the course of 2011 will be further introduced the Performance Control system designed to transfer up to 80% of the total torque on the driven wheel outside the trajectory, while the inside wheel is slowed down so as to make easier to travel in curves.
The new 2011 BMW X3 restyled model changes in Length to differentiate from the X1: 4.64 meters, 7 cm more than the current, and is also larger 3 cm (1.88 m). Again talking about aesthetics, you notice a more angular lights sharp, smaller “kidney” shaped grill as in all 5-6-7 series; the rear remains almost the same using LED headlights.

Speaking of mechanics, the Bavarian house never loses the opportunity to renew its engines, automatic transmission ZF eight gears (standard for 6L) is available, while the four cylinders is matched to a six manual gear. Obviously can not miss the EfficientDynamics plus for the first time the Start & Stop. The first two engines will be available  as xDrive20d,  a 2-liter turbodiesel four-cylinder 184 hp and the xDrive35i six-cylinder turbo engine with 306 hp Valvetronic system. Both versions are available with 4×4 traction. The other big news is the transmission: for both petrol and diesel is available a new eight-gear automatic transmission, which are also equipped the latest models from the X5. Finally, the new BMW X3 can be provided upon request with an electronic shock absorber control, which doesn’t set only the car trim, but the engine response and the behavior of ESP on the steering according to the setting chosen between “Normal”, “Sport” and “Sport +”.  The Bavarian SUV will be presented during the Paris Motor Show, held from 2 to 17 october 2010.