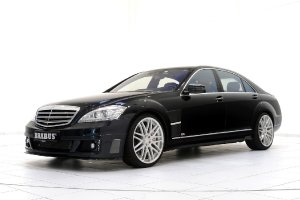 Brabus, Mercedes-known tuner based in Bottrop, created with the Brabus SV12 Biturbo R the fastest luxury sedan in the world, based on the Mercedes S63 AMG, with technical solutions that maximize power and performance levels of excellence.

THE MOST FASTEST LUXURY SEDAN: the number 800 in the name refers to the exact number of horses provided by the powerful engine installed by technicians under the black hood of this car. Obviously it has been necessary a series of technical and structural changes to allow the car to cope with the new exorbitant power. The base is in fact the 5.5-liter V12 adopted in the new Mercedes S 600 increased to 6.3 liters, which comes to release 800 hp and 1,423 Nm thanks to the twin turbocharger and high-performance components as the front air intake made of carbon fiber until, steel exhaust, while the 5-speed automatic transmission has been reinforced to withstand the enormous forces.

PERFORMANCE OF SUPERCAR: To sustain these values of acceleration and speed BRABUS had to install 19 “and 21” Monoblock wheels, combined with Pirelli or Yokohama tires. The braking system has been updated to allow the car to stop in time even at high speeds. The changes applied from the tuner make this sedan a car that can compete with the main supercar in terms of performance, while maintaining the comfort and luxury features typical of the prestigious Mercedes cars. 0 to 62 sprints are managed in just 3.9 seconds and its Autobahn-devouring top speed is electronically limited to just 217 miles per hour.