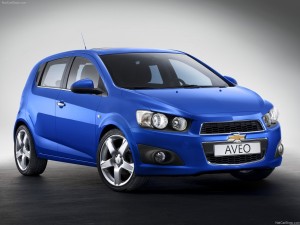 The new Chevrolet Aveo is the latest weapon designed by the Chevrolet car brand, becoming increasingly fierce and launched toward the conquest of the European market with new models full of detail. The new model has a very sporty appearance and a more  organized safety equipment. Chevrolet Aveo Model Year 2011 is an mediun city-based configuration to a 3 or 5 doors, with a wide wheelbase and minimum break lines. The interior space is good, thanks to more generous dimensions of the previous model, such as to ensure not only internal but also a large load capacity of ist car segment.
Not too different from the first concept presented in Detroit and then in Geneva, the new Chevrolet Aveo comes with a sporty design, starting from the high front line, with double headlights and the typical split grille. The rear is not so unusual and shows the usual Aveo lines, with almost vertical tailgate and rear window, topped by an aerodynamic spoiler which occupies the entire frame of the crystal. The tail lights recall the double light of the front, with bright plastic and large lenses. The interior design has made a quantum leap, with an essential dashboard but nice and covered in soft plastic, which integrates the audio system (with MP3 input), and climate controls. The instrument panel instead includes speedometer, tachometer, temperature and fuel gauge with well made chrome insert. The average capacity of  trunk is 220, which can increase up to 980 liters reclining seatback. Among news of Chevrolet Aveo, car derived from the old Daewoo Kalos 2002, there is standrd ESP and will be available with two petrol engines: 1.2 from 70 to 86 HP, this latest version takes 0-100 km/h in 13 seconds, fuel consumption and emissions stood at 5.5 litres/100 km in combined cycle (7.2 and 4.6 extra-urban ) and 132 g/km. More powerful is version 100 hp 1.4 engine which can also be combined to a six-speed automatic transmission, accelerates from 0 to 100 km / h in 11.9 seconds, with combined fuel consumption of 6.0 litres/100 km (7.9 urban and 5.9 rural), and CO2 emissions of 140 g / km. The alternative is a 1.3 diesel 75 and 95 hp:  the most powerful version comes equipped with Start & Stop. Will be on sale from summer 2011 at 11,000 euro average.