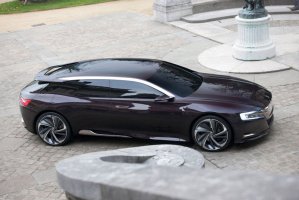 New Citroën Numero 9 concept comes with official images and details of the car ahead of its Beijing Motor Show debut this month. The prototype, interpreters 3 new DS models, including a small saloon and an SUV originally planned. At least two of DS models will probably reach Europe’s markets. The Numero 9 flagship concept will give styling ideas to the new up-coming French’s cars including a 5-series rival which would takes the DS9 name.

It’s style is undoubtedly unique with unique proportions. It’s 4930mm long, 1940mm wide and 1270mm high, with a wheelbase of 3000mm. The size puts it near a Porsche Panamera and between a the 5-series and 7-series. The DS9 adopts an striking elongated shooting brake design with extensive grille flows into a distinctive strip of LED daytime running lights . Aerodynamic efficiency is improved by a thin back roof-spoiler and the exclusive alloys wheel that works not just for the look, helping the air-flow around the wheels.

Under the bonnet is an advanced plug-in hybrid engine which offers 166mpg and 39g/km of CO2 emissions. The electric motor is a 69bhp, 148lb ft which pushes the rear axle. Thermal engine is a 221bhp, 203lb ft 1.6 THP petrol dedicated on driving the the front wheels of the Citroën DS9 concept. Some leaks close to the firm claim that a diesel powertrain would be included for European buyers.

The Numero 9 is believed to have a 0-62mph in 5.4sec and despite the overall performance, the fuel economy is also effectiveness with 166.1mpg and just 39.2g/km of CO2 emissions.