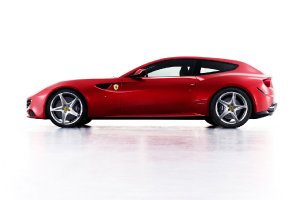 New Ferrari FF offical images have been shown in recent days from Maranello’s carmaker wich also released a video dedicated to the new car. The new four-seat grand tourer is a shooting brake 4wheel-drive and is the successor to the Ferrari 612 Scaglietti which in turn in  2004 had replaced the 456 GT of 1992.

The FF is truly a unprecedented Ferrari and Maranello has given a preview through a live broadcast on the web site Ferrari.com. The spectacular video, that we embed below, was made with day and night shooting, is a highlights summary of tests around the world, both road and track.

Design is very smart and refined and is the result of the synergy between Pininfarina and Ferrari Style Center directed by Flavio Manzoni (ex-Volkswagen). Beyond aesthetics, outstands the tailgate and the cargo with the volume ranging between 450 and 800 liters, thanks to folding rear seats. Ferrari has not released any cockpit’s images and for this we wait for the official Ferrari FF debut and scheduled in Geneva, next March (3 to 13).

F AS FOUR: the more important fact is the debut of the all-wheel drive 4WD on a Ferrari. F mean four. The permanent four wheel drive system has been developed by Ferrari and, according to the manufacturer, would reduce the weight by 50% compared to the traditional scheme, while ensuring an optimal weight distribution for a sports car, with 53% at the rear. The engine is the new 6.3-liter direct-injection V12 delivering 660 horsepower at 8,000 rpm and 683 Nm of torque at 6,000 rpm. Top speed is 335 km/h, 0-100 km/h in 3.7 seconds. Fuel consumption and emissions (ECE combined): average fuel consumption 15.4 l/100 km, CO2 emissions 360 g/km. Suspensions are new type magnetorheological damping third generation, as well as the evolved version of carbo-ceramic Brembo brakes.