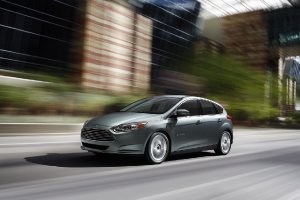 After months of leaks and teasers, Ford has finally unveiled the Ford Focus Electric at the Consumer Electronics Show in Las Vegas. The carmaker of Detroit also reported the introduction of five new electric vehicles (including under this definition hybrids and  hybrids plug-in) in 2012. The Ford Focus Electric is a 100% electric car, without thermal engines and, therefore, zero emissions, such as the Nissan Leaf.

WHAT WILL CHANGE: what we publish is the official video showing the electric car in action, anticipating the launch of the model in the United States. Focus Electric is identical to the versions with petrol and diesel engine, is different for the front, which has one large radiator grill covered for the entire width of metal moldings instead of the two central and two side vents, 17 ” alloy wheel and the attractive light circle around the power outlet, which also indicates the charge level of the lithium-ion battery of the car. Interior do not have the actual instruments and dials are replaced by an LCD screen whic is part of the concept SmartGauge already seen on the Fusion Hybrid and the 8-inch touch screen MYFORD multimedia system for the charging management, also remotely through smartphone and  a software developed by Microsoft.

Ford has not released any technical specifications of the new car, which is absolutely able to reach 136 km/h. Ford said that his car has zero emissions and consumption level better than the Chevrolet Volt batteries and other rivals in the market as the Nissan Leaf. The car needs 3-4 hours to recharge its battery if you use the home charging unit supplied by Ford, which raises the voltage from 120 to 240 volts, and probably also the amperage. The battery temperature is monitored and is produced by Ford’s Rawsonville with cells supplied by LG Chem.

The Electric Ford Focus will be produced by the end of this year facing a year of testing before being offered to customers. All Electric Ford models will be regularly on catalogue by 2013