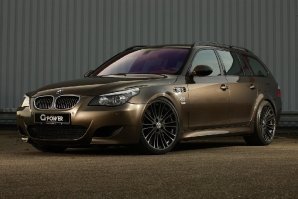 G-Power Hurricane RS Touring, described as the world’s fastest station wagon, is the new proposed version of the German tuner G-Power, active since 1983 exclusively in car tuning for the Bavarian brand. The Tuner has indeed revised the 5.0 V10 engine of the BMW M5 Touring E61 adding two compressors to increase power to 750 hp and maximum torque to 750 Nm, the maximum speed (limited) is 360 km/h.

Performance increasing has led to many changes to ensure the car safety. The Hurricane RS Touring, therefore, comes with G-Power Silverstone Diamond 20 ” wheels and Michelin Pilot Sport tires, 255/35 ZR 20 to front and 285/30 ZR 20 to rear, disc brakes have a diameter of 396 (front ) and 380 (rear) mm, respectively combined with 6 and 4 clamps (optional ceramic discs are available). The interior, finally, is in Alcantara. The average price in Europe starts at € 242,000 , excluding taxes and optional extra.