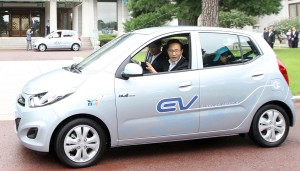 Hyundai has unveiled in recent days BlueOn, his first electric car built on the basis of the small i-10. Since 2012 Hyundai will start marketing the BlueOn, at a rate of 2,500 units per year. Hyundai Motor Corporation has invested 40 billion won, in the project BlueOn, approximately 27 million euros, and 20 units will be produced already by October. A fleet of 30 Hyundai BlueOn, however, is already in production and should be tested by the South Korean government in city traffic, at the next G20 summit in Seoul. The vehicle is 3:58 meters long, 1:59 wide and 1.54 high, the BlueOne is equipped with a rechargeable lithium polymer battery that powers an engine 61 kW (83 hp) and 210 Nm. Performances are more than acceptable (0-100 km / h 8.1 seconds, 130 km / h top speed), while the range is indicated at 140 km. The car can be recharged with a simple household outlet and takes 6 hours, can reach 80% battery life in just 25 minutes with outlets at 380 volts – high amperage. All this without compromising on performance wich are entirely acceptable: maximum speed of 130 km/h and acceleration from 0 to 100 km/h in 13.1 seconds. Regard this, the Korean brand has alread despatched, in collaboration with the City of Seoul and other government agencies, plans to build a supply network that can interact with the charging system, equipped with an advanced telematics and remotely controlled on the car by the “Supervision Cluster”, a system with 4.2-inch screen that provides information and instructions through a voice.

The All New Mini