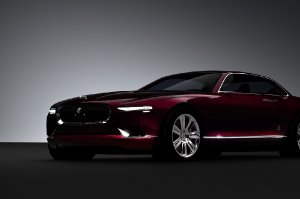 The B99 is the Jaguar concept just presented at the Geneva Motor Show (3-13 March) and the sixth Jaguar model built by Bertone styling after the XK 150 produced in limited edition with just four cars and concept cars as Jaguar FT, Jaguar Pirana and  Jaguar Ascot. The 99 symbolizes the year of the Italian company and the B is its name abbreviation.

The newborn’s Jaguar is a perfect example of elegance and style that has always been the jaguar, the body is aluminum made and wrought by hand, with a quite rear cockpit with wide sides and a retractable rear spolier. The hybrid power system is also advanced and developed by the Energy Division Bertone, who for over twenty years pursuing the study of alternative powertrains.

The global head of Jaguar Adrian Hallmark has stated that “this is not a prototype suitable for the current Jaguar. I also appreciate the work that led to the realization of the concept car, but the B99 is not just for us”. So we wonder: Why did they built that concept?