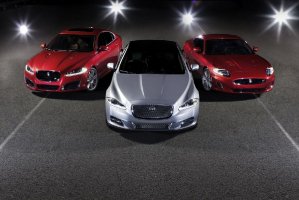 For Jaguar is time of change: at the Auto show in New York (April 22-May 1), the British brand has just presented a revised XF receiving aesthetic change which affect even sportiest version XFR and XK, while some new official videos of their facelift have been released.

The Jaguar XF shows a new design but most of all an updated mechanics, with the new four-cylinder turbo-diesel and a 8-speed automatic transmission. Jaguar folks worked on headlights for a more streamlined and slim design with Led J-shaped, the front grille is slightly lower positioned, while the rear gets the two parts alignment that before looked like a kind of step. The XFR gets new bumpers, with the redesigned nose with three large loopholes, and a small spoiler applied to the bonnet. Among the new engines the 2.2-liter turbo-diesel four-cylinder 190 hp, which delivers a maximum torque of 450 Nm, combined with the new 8-speed automatic transmission made by ZF. New Jaguar XF benefits good performance: 8 seconds on 0-100 km/h, top speed of 225 km/h, consumption are of a lower category (4.5 l/100 km), while CO2 emissions are below 150 g/km. The V8 supercharged of the XRF doesn’t receive changes, but the interior is offering a new infotainment system with 30 GB hard drive, a new sound system and different finishing, while among extra optional debuts the adaptive cruise control. The XF and  XFR will be on sale from July 2011.

The new Jaguar XK gets a facelift with new light band below the front bumper, changes such as for the XF, concern headlights receiving a more soft design with LED lights, while new air intakes stand on the hood and alloy wheels are by 18 to 20 inches. The aluminum body is available with five new colors. Inside new Jaguar XK,  designers introduced new finishes, a new type of soft blue lighting, a new type of sport seats (optional extra), new leather steering wheel with paddles and USB iPhone. No changes at mechanical level or engines range: the new Jaguar XK does not receive the 8-speed automatic transmission as the new XF.