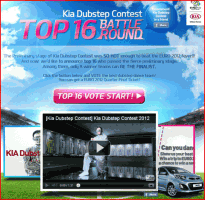 Can you dance to dubstep? Show your moves and win a trip to EURO 2012 and a chance to win a new Kia Picanto! This is the slogan for the Kia Dugspet Contest launched last month. With the UEFA EURO 2012 starting next month, and as the official partner of the event, Kia desires to motivate fans by mixing two of Europe’s most popular entertainments as the professional soccer and electronic music.

The Kia Dubstep Contest is accessible on the official Kia’s Facebook fan page. The competition consist on a worldwide dance battle through latest famous network such as YouTube and Facebook. All videos must have the music track dubstep DJ Flux Pavilion “I Can not Stop”. This is the song that you dance. The rules are simple and as you can see from the YouTube channel some of the dance talents have already started out on.  After a 16 Battle round 8 dance teams will win a trip to Warsaw, Poland to watch the first match of EURO 2012 to celebrates the event’s opening. Who gets to the final battle can win a brand-new Kia Picanto.

The global competition is certainly an interesting experience from Kia to entertain users by placing it’s brand more towards a younger market that is more web focused.