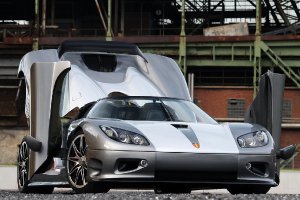 The German tuner Edo Competition made one more custom “creature” with a pack of changes for the Swedish supercar Koenigsegg CCR. Edo Competition is one of the few tuners in the world to have boosted very rare and very powerful supercars like the Lamborghini Murcielago, Porsche Carrera GT and even one of  the 30 cars in the world of Ferrari FXX.

WHAT CHANGES: the work mainly involved the mechanics development with the use of two Rotrex compressors and remapping electronic control unit ECU to increase power and at same time lowering the engine rpm. These changes have increased the power of the 4.7-liter V8, increasing it from 827 hp to 891 hp with maximum torque of 900 Nm at 7,200 rpm.. The six-speed manual transmission has been completely disassembled to replace the plastic bushings, to get short gear and quicker changing. Some aesthetic changes have improved the sporty design without compromise its unique character. Outside features include new 20 ” nine-spoke alloy wheels with huge rear tires 335/30 ZR 20 and 19″ front 255/35 ZR 19, while the revised braking system shows red calipers Brembo. Inside the new coatings are made of alcantara, while the sound system was replaced with a new Pioneer device which allows to check the parking through a huge screen. Among standard optional are new sensors for tire pressure and to control the mechanical and dynamic parameters of the Koenigsegg CCR by Edo.