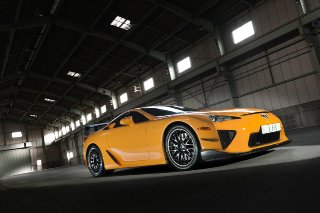 Lexus has unveiled the final version of the LFA Nürburgring Package, the latest LFA’s evolution born by a project in 2000 which will be sold with only 50 vehicles. The Nürburgring Package is focused on emphasizing the competitive skills of the Lexus supercar. Lexus has created the Nürburgring Package to celebrate the victories in LFA Nürburgring 24 hours. LFA’s standard production models is based with only 500 cars (50 with Nürburgring Package), and all of them were booked within a few weeks, more than doubles requesting of the availability, a result that wasn’t expected even by Lexus. AERODYNAMIC: Changes under the Nurburgring package increased the downforce at high speeds, with the use of details in reinforced plastic and carbon fiber front spoiler as the most ‘great, the rear wing and other aerodynamic. Carbon is also used in other parts inside the car as the inside of the doors and the shells of the seats. STABILITY: The changes have also affected the LFA on the chassis and suspension, in particular, have changed the calibration of the springs and dampers and a reduction of 10 mm height from the ground. To complete the intervention were chosen sull’assetto specific rims with soft compound tires. ENGINE: under the hood of the LFA is iol V10 4.8-liter engine when it is a phenomenally well with 560 hp, which become 570 for the Nürburgring Package, thanks to its innovative frame consisting of 65% carbon, a material called CFRP . Acceleration from 0 to 100 km / h in 3.5 seconds with a top speed of 325 km / h and a maximum speed of 9,000 rpm.

Limited, however, the choice of exterior colors: matte black, orange, white and black, paired in two-tone black and red, black and purple, or totally black.

Next post: Jeep 70th Anniversary Editions gets to europe