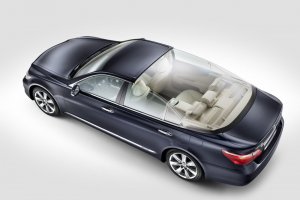 The Lexus LS 600h L Landaulet was the official car of the wedding, celebrated on July 2, of the Prince Albert of Monaco and Charlene Wittstock. The Japanese company, together with the Belgian specialist Carat Duchatelet, had been instructed to deliver a very special version of its hybrid flagship, who then accompanied the couple during the wedding event.

During the ceremony and especially after, the Lexus LS 600h L Landaulet took the royal couple to collect greetings of their people with a tour of the small state. The tour, which ended as usual with the launch of the bridal bouquet to the Monegasque by Princess Charlene. The great respect for the environment of the Prince of Monaco were already known and in fact, for most of the route the vehicle has traveled only with the electric motor. At the end of the bridal tour the Lexus LS 600h L Landaulet was exhibited at the Media Centre and then in the Oceanographic Museum of Monaco.

To transform the Japanese hybrid sedan nedeed a lot of work that has been carried out by Carat Duchatelet, (a Belgian specialist of armored vehicles), along with the Lexus engineers. The various steps involved the removal of about 20,000 mechanical parts, electronic components, instruments and upholstery. Subsequently the roof has been removed as well as pillars and reinforced the frame of the vehicle. Finally placed the single structure that acts as a transparent roof (made by a specialist company of aerospace components) made with a 8mm layer of polycarbonate and only 26 kg. Engineers and designers, at the end, have been engaged for over 2,000 hours (see video below) and finally with an elegant body-sticky color “Midnight Blue” applied by hand on the Lexus LS 600h L Landaulet, using several layers of  a dedicated ecological paint.