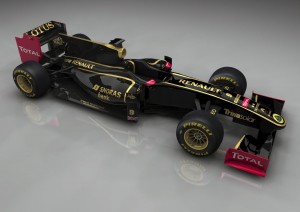 Born new team Lotus Renault GP Team Formula 1. The Lotus Group has expanded its presence in the circus to become the majority shareholder and primary sponsor of the new team until 2017. The black-gold team is back. The French team will be called Lotus Renault GP, a marriage that brought back to the 80’s when there was the first alliance.

The team said in a press release, “The Lotus participate significantly to the Lotus Renault GP team with Genii Capital,  the strategic alliance just signed represents the total return of Lotus in the sport” Behind it all, there is the Proton’s decision, Malaysian company that owns Lotus cars, to enter in F1 and will do so through its own sports brand. But the agreement was created and developed through another partnership that consist for the Proton many of its cars and engines with mechanical production by Renault, wich will strong support the team with which won the 2005 and 2006 championships. The Lotus Renault GP will continue to run as Renault and Renault’s badge will be prominently visible on the livery of the car. Is this new alliance able to upset competitors plans in Formula 1?

News across the web

Next post: OPEL CALIBRA INSPIRED BY THE GTC CONCEPT