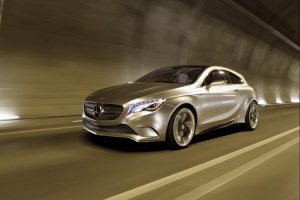 Mercedes Benz recently unveiled their A-Class Concept both hatchback and convertible one of the German auto manufacturer’s main attractions of latest auto shows. The new generation of the A-Class, which will rival the BMW 1-Series, Volkswagen Golf and Audi A3, is expected to go at showroom next year, together with a new family of compact cars, like the B-Class and baby CLS. German car maker has released a new video (below) of the Class A-Class Concept hatch, which shows the various constructing’s steps.

The new model is 4.2 meters long and 1.45 meters high, it get away from from the MPV style to become a compact sedan with well designed sporty shapes with the traditional starry sky style. One of the most fascination that captures the eye are the full-LED high-performance lights consisting of 90 optical fibers with their own aluminum sleeves arranged to look like wings inside the headlamp. In other words the new concept is being described as a redefinition of what a premium hot hatchback should be. Inside the car is exciting as its exterior, especially the Jet inspired dashboard with air vents look like a aircraft engine.

The Concept A-Class is a front-wheel drive model that hides under the hood the 2.0 liter four-cylinder engine with direct injection taken from Mercedes’ M270 series. Consequently the concept close to production is capable of producing 210 horsepower mated to a dual clutch seven-speed transmission that was used on the new Mercedes B-Class. Mercedes confirmed also a new sports variant four-wheel-drive AMG with 350 hp.

Next post: Latest Mazda3 facelift pictures and specs ahead launch