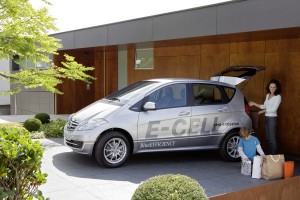 Mercedes-Benz breaks a new and historic achievement: the Mercedes A-Class is the first electric variant of a car born with internal combustion engine to come out of the assembly line, with undeniable advantages in terms of production. The A-Class E-Cell, equipped with batteries supplied by Tesla, is the second electric car produced by the German carmaker Mercedes, the first was the B-Class F-Cell. The five-seat compact car based on the classical version of the Class A is spacious and versatile. Not even the lithium-ion batteries take away space inside, as they are arranged on the floor, even more surprising result is relative to the luggage compartment, also remained intact and usable 100%. The autonomy of the car is 200 km and the traction is guaranteed by an electric motor 70 kW (95 hp) with torque of 290 Nm, 0 to 60 km/h in just 5.5 seconds and reaches 150 km/h (speed electronically limited) – will initially be produced in a series of 500 units, for an experimental lease program. The A-Class Mercedes E-Cell will be produced in only 500 units in the German plant in Rastatt, near Stuttgart. The marketing should start in early 2011. Official presentation of the car will be made during the upcoming Paris Motor Show.