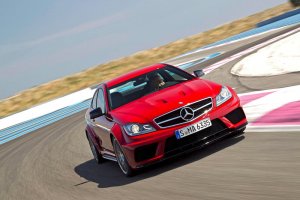 After the first appearance at the Grand Prix of Germany last week, the German carmaker will bring the coupe C 63 AMG Black Series at the upcoming Frankfurt Motor Show to be held in September 15 to 25. The new version has been enhanced and deliveries will begin in early 2012, while the price on the German market is stated at 115,400 euros. The interior of the Mercedes C 63 AMG Black Series stands out with two bucket racing seats while the single rear seat is not provided on the standard version, but it can be ordered as optional. The leather steering wheel features paddles, while among equipment that normally characterize AMG range, the automatic climate control, the Hi-Fi and the adaptive cruise control. For drivers who like the extreme are available two optional packages: the AMG Track Package and the AMG Aerodynamics Package.

THE V8 of The C 63 AMG Black Series Comes From the SLS.

The C63 AMG Black Series stands, of course, for a sporty design that could certainly not be overlooked on a sports car like this, starting from the larger car track. The air intakes gets change by increasing its size, as well as wheel arches and spoilers, while the hood shows air diffuser. the sports design is completed with 19-inch wheels, with 255/35 tires up front and 285/30 rear. As for the V8 6.2-L of the C 63 AMG Black Series, Mercedes engineers have modified the engine of the SLS AMG M156 getting a power increase to 517 hp and 620 Nm. According to the declared values, the coupe C 63 AMG Black Series takes 4.2 seconds to start from zero and reach 100 km/h, thanks to the 7-speed transmission AMG Speedshift MCT with dry dual clutch, which ensure a shift changing speed of just 100 milliseconds, both with manual  and sports mode.

The C 63 AMG Black Series coupe has also received much attention in the balance with the use of more powerful braking system, which uses front 390 mm ventilated discs and 360 mm rear. The high level of performance of the coupe C 63 AMG Black Series has determined an appropriate ABS setting, while stability control is set for three level, ESP ON, OF  and Sport +.