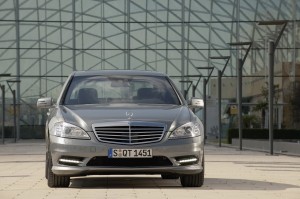 Mercedes-Benz introduced the restyled 2010 S-Class BlueTEC, a version with BlueTEC technology combined with the AdBlue that cuts CO2 emissions to 80%. The new Mercedes S-Class BlueTec is approved in accordance with the strict Euro 6 (come into force in 2014). Along with this release, the German brand has introduced two new safety devices on all models, that make the 2010 S-Class even safer.

Reduced consumption but increased performance: Thanks to the mechanical improvements, the new restyling gets consumption reduction from 7.6 to 6.8 liters per 100 km and less CO2 emissions from 199 to current 177 g/km. Engine power increases also from 235 to 258 hp and 629 Nm of torque. Now the S 350 BlueTec from rest takes 7.1 seconds to reach 100/Km and has a top speed of 250 km/h, electronically limited.

Mercedes S 350 BlueTEC have introduced two new systems for active assistance, it is the Active Lane Keeping Assist with the task of curbing the rear wheel slightly on the inside of the car and correcting the trajectory at the first sign of skidding. the Active Blind Spot Assist, operates in case of dangerous lane change, run a red glass in the exterior mirrors, if the driver ignores the warning, the ESP makes a slight braking.