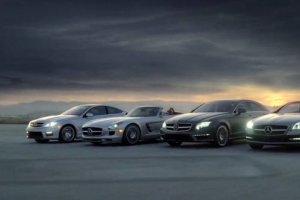 At last Sunday Super Bowl of Feb. 6, after Chrysler (2 minutes of advertising for 9 million dollars) also the German carmaker Mercedes-Benz has created a spot for almost a minute and a half, in which the company has filmed, for the first time, the new AMG Mercedes SLS Roadster and the new AMG Mercedes C-Class Coupé. A very unusual debut for the two sporty car: have look!

The aim was to celebrate 125 years of the brand. The teaser plot is pretty simple, but effective, and is based on the idea that all current and old Mercedes come alive with its own life and on the song “Mercedes Benz” by Janis Joplin are directed towards the MB dealership where the most recent innovations of Stuttgart are showed. The new SLK, the CLS 63 AMG and, for the first time in world premiere, the SLS AMG Roadster (launch planned in Frankfurt) and the new AMG C-Class Coupe that will debut at the Geneva Motor Show (3-13 March 2011).

Next post: FORD takes FERRARI to court: "F150 is our trademark"