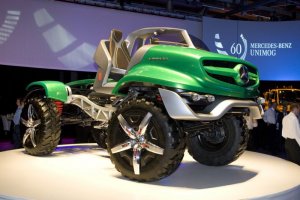 Maybe looks more like a truck than a car but the Unimog Concept by Mercedes shows a spectacular design which attracts the attention, even the more disinterested people. The Truck Concept is the result of a futuristic and eccentric interpretation of the famous Daimler Unimog, a truck of 1951 famous for its quality in terms of off-road performance.

Mercedes wanted to celebrate the 60 years of his old Unimog (Universal-Motor-Gerät), ordering more than 2,000 small units to Lego firm, that faithfully reproduce the real truck. The Concept Design 60 Years Unimog, as they called it, is based on the platform of the Model U 5000, a vehicle that is still used by military forces and civilian for missions in difficult terrain.

The design, as the model of 1951, has the open cabin, while the front recalls the current style with the grille and fog lights of the CLS Class. The U-5000 has been created by the team Mbs (Mercedes-Benz trucks) and designers from the commercial vehicles of Daimler. The Unimog Concept is not designed to anticipate a new model, but, according to Bertrand Janssen, head of Daimler’s commercial vehicles division, anticipates some future details of the range.