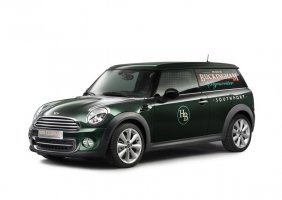 Clubvan is the first commercial vehicle and the seventh model in new Mini range.

Mini has revealed information and official images of the new Clubvan, a two-seater commercial car, first seen at the 2012 Geneva motor show and based both on the Mini Clubman, and on the 60’s Morris Mini Van.

Ahead of its official launch at this week Goodwood Festival of Speed,  the commercial vehicle has a maximum 860 litres and 500Kg of load capacity. Cargo area can be reached via either the rear doors or the rear-side door on the right side of the van. Mini Clubvan features, in the load area, several 12-volt standard sockets for charging any electric equipment and six attachment loops for cargo securing.

Mini designers used high-quality materials to trim the load part, while the reinforced-rear-side windows are key-coloured.

Mini Clubvan, has recently been confirmed for production, and will be priced from £11,170 excluding VAT. The carmaker confirmed three power units all 1.6-litre four-cylinder. Two petrol engines with a 97bhp for the £11,174 One and a 120bhp for the Cooper version priced at £12,474. The diesel Cooper D comes with 110bhp and listed with a price of £13,600. All version are fitted with standard a six-speed manual transmission, while buyers can choose the optional six-speed automatic in the Cooper D with £910.

If you looking for cars you can find inexpensive quality second hand cars for sale.