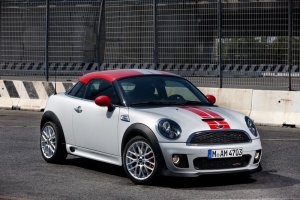 Here are the first official images of the Mini coupe, after those spy that recently we have published and where the Anglo-German two seater was partially camouflaged. The new model, now even more exciting, ia based on the 2009 MINI Coupe Concept, aims a even more sportiveness and driving pleasure, but this of course is already part of the MINI dna.

DESIGN: as already said in a recent post, the sportiest version of the Mini features just the two-tone color, except for the special version Midnight Black, which will be sold since the commercial launch with its glossy black body with matt black roof. The most featuring details of the new MINI Coupe is the increased inclination of the A pillars, the height reduction of 52 mm and the particular shape of the roof, which seem to cover the rest of the body. The body of the new Mini Coupe stands out the active rear spoiler that comes out when exceeding the speed of 80 km/h, optimizing the aerodynamics of the rear vehicle. The Mini Cooper Coupe features 15-inch alloy wheels, 16 ” on SD and Cooper S and 17 “on the sporty version John Cooper Works Also equipped with runflat tires.

The MINI Coupe will be officially unveiled at the Frankfurt Motor Show (15-25 September), while we wait the Detroit Motor Show (9-22 January 2012) for the official presentation of the new model called MINI Roadster.