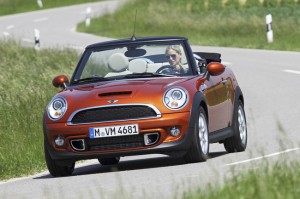 The next September is the official launch’s date of the new range MINI,  renewed by introducing design changes, new diesel engines and a range of exclusive equipment. The small British car, owned by BMW, is to submit a umpteenth retouch to his appearance.

New Design: The new Mini Cooper shows a LED technology to the tail lights and the front hood has been redesigned for greater pedestrian safety. Complete restyling the front bumpers that incorporate a slightly larger air intake. They’re also updated colors for the body and some new details at the interiors, new color “British Racing Green”, “Orange Spice” and “Eclipse Gray” are only available for the Mini Cooper S.  Version “John Cooper Works” is available with the “Chili Red” roof and combined door mirror cover.

Equipments: Now with Mini you can choose equipment such as xenon headlamps, which for the first time, using the system “Adaptive Headlights” that directs the headlights  in line with curves and the speed of the car. Other news also covers Multimedia technologies such as the radio Mini Visual Boost with 6.5″ integrated screen that allows you to play video files stored on the iPod and display address book and calendar from smart phone via Bluetooth connection. The audio and navigation systems have a greater level of integration with external devices and mobile phones.

Official launch in Europe since August