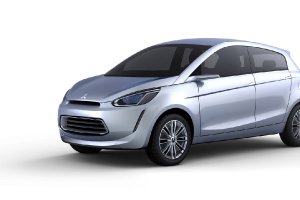 Mitsubishi Concept Global Small is the name of the concept that we will see at the Geneva Show in March and that’s just the anticipation of the model that will go into production in 2012. The Japanese company will produce the standard model at the plant just opened in Thailand at Leam Chabgang, the third active in the country and ready to start business in March 2012 with a volume of 150 thousand units, upgradeable up to 200 thousand.

Compared to first published drawings, the little Mitsubishi design is more balanced and practical as well as being equipped with several solutions to improve the aerodynamics.

The production model that will result from the Global Small Concept will be equipped with engines of 1.0 and 1.2 liters, according to the manufacturer should give about 95 g / km of emissions (for distances of about 25 km per liter). The result will be achieved thanks to the lightness of body and energy recovery during braking. Upon request, you will also have the continuously variable trasmission CVT.

Next post: 2012 CHRYSLER 200 CONVERTIBLE to be Lancia Flavia in Europe