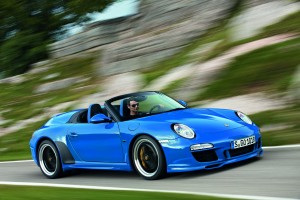 Porsche introduces the new version of the 356, the 911 Speedster just shown as its world premiere at the Paris Motor Show which is taking place in the French capital 2 to 17 October 2010. It has sports seats, plastic windows, an oblique windshield. The supercar is set to become a model of top sporty, will be produced as limited edition of 356 units, the price will be about 198,000 euros on average for the European market.

‘Porsche Exclusive’ Customizing: The new Porsche 911 Speedster will be customized as desired by the Porsche Exclusive program, you can choose any aesthetic component of the body including the color of the plumage, side skirts, spoiler and many other details, the interiors have the same opportunity by offering multiple solutions.