New Aston Martin Virage is back after 15 years 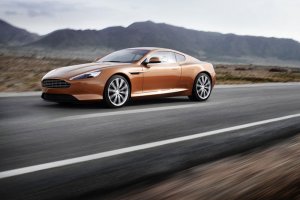 The Aston Martin Virage is back with the words used by the chairman of Aston Martin, Ulrich Bez, to present the Virage (Coupe and Volante), the latest from the British carmaker. Reborn after nearly 15 years with his brand new orange color and said Ulrich Bez: “100 years of history have shown that the evolution is the best solution over time.”

The new body is available as Virage coupe and cabriolet which Aston Martin calls “Volante”.  On board the new Aston Martin Virage you can breath a refined and pleasant aroma of leather made from Scottish Bridge of Weir. Standard features include the navigation system developed with Garmin. New is also the interface with improved display resolution and map quality. Standard equipment includes also cruise control, Bluetooth system pre-placement and 700W Aston Martin Premium Audio System with Dolby Pro Logic II and iPod imput.

This car comes with the V12 6.0 Lt rated at 497 hp (23 more than the DB9 and DBS in less than 20) and 570 Nm of torque. Regarding the transmission, the gearbox is an automatic six-speed Touchtronic II, placed at the rear transaxle according to the scheme to give the perfect balance of weight 50:50. Although thid version is not particularly oriented to extreme performance, the Virage is still able to reach 299 km/h and accelerate from 0 to 100 km/h in 4.6 seconds. In addition, Aston Virage offers Adaptive Damping System, Adaptive suspension system and carbon-ceramic brakes.