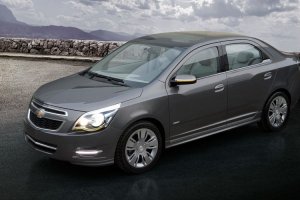 Cobalt sedan will arrive in Europe

The 5th edition of the Salón Internacional del Automóvil of Buenos Aires was an opportunity for Chevrolet Colorado rally to present the concept but also the Cobalt sedan concept, designed and engineered to be marketed in South America in Africa, Middle East and Europe as an alternative Aveo sedan or the Cruze.

Stylistic features of the Chevrolet Cobalt Concept
The design of the Chevrolet Cobalt Concept shows all the stylistic features of the Chevrolet brand as the front that markedly recalls the MPV Orlando , with the classic two parts grille with the chrome bar, the headlights with LED daytime running lights, which now is a ever-present on almost all new models. As for the cabin, the interior features two-tone upholstery Urban Very Light Platinum, while the finish and the position of equipment remains unchanged, except for the seven-inch screens of the front headrests. Finally, on an aesthetic level the Cobalt Concept stands for dedicated 17 ” wheels with 255/45 R17 tires which are part of a sports aerodinamics kit developed in the Centro de Diseño de GM Sudamérica .

Cobalt Concept engine efficiency
To meet the expectations of the various markets where downsizing and engine efficiency of the have more and more importance, the production Cobalt will be equipped with a wide range of four-cylinder engines. Those will be divided in two displacement by 1.3 and 1.8 liters and will matched to both manual and automatic transmissions. Later versions may also featuring version diesel and ethanol.

Previous post: Gordon Murray T.27 to be the World's Most Efficient Car