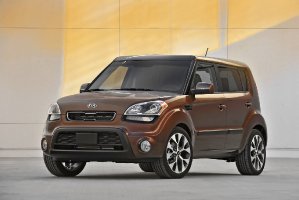 The 2011 New York Auto Show has been the stage to introduce the Kia Soul Model Year 2012 which proposes both technical and aesthetic updates after only three years of existence. This model is important for the Korean house especially in U.S.A. where in 2010 were sold 67,110 units, almost a fifth of the total units sold in that market.

LIGHT FACELIFT: aesthetical changes will be probably replicated on European models and are focused on the front which receives new headlights with LED daytime running lights, a revised bonnet and the bumper with a new frame while the rear bumper gets also new lights with LED and a horizontal black bar. Among interior devices, debuted a new LCD screen with reversing camera, some advanced devices like the new car stereo mp3-USB-iPod, and multimedia Uvo which was developed with Microsoft.

The most important mechanical innovation of the 2012 Kia Soul is the 1.6 GDI (gasoline direct injection) 140 hp and 164 Nm, already shared with the model Sorento, and compared to the current 1.6 CVVT engine, results more efficient through greater Power: +15 hp and + 8 Nm.

The new Kia Soul will arrive in U.S. showrooms also with a petrol engine 2.0-liter 162 hp, while in autumn will be on sale in some European countries starting from England.