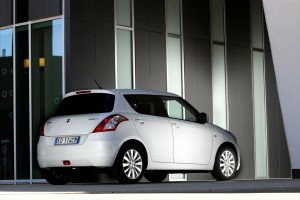 New Suzuki Swift comes on EU markets with latest version 2011. It grows in the shape than earlier model and is longest of 9 cm, width and height remain almost the same, despite its weight decrease: 20 pounds lighter than previous version, reaching 945 kg for the base model. The new Swift is a safety car first of all, having recently achieved the coveted 5 star Euro NCAP in 2010 ‘Safety Performance Test Programme’.

Interior: On board of the new Swift is felt immediately better interior quality, combined with a simple design, simple as Japanese tradition, but at the same time efficient and sporty. The dashboard is completely new and has a more refined look. The center console has the fluorescent screen, the instrumentation consists of tachometer and speedometer embellished with chrome surrounds, with a central information board computer. Consequently, the new Swift, always given in the variants 3 and 5 doors, offers more space for passengers and today the luggage compartment is 211 liters, the best around, but it can increase, breaking down the rear seats, up to 512 liters.

Engine and equipment: The new Swift is available with a new 1,200 cc petrol by 94 hp. According to Suzuki this engine as well as less “hungry” than the one it replaces, will get an average of 24 kilometers per liter, up from 17.2 of the previous, thanks to the Stop & Start system. Useful is new eco-friendly automatic transmission that requires an extra one thousand euros. Alternatively there is a revised version of the 1300 cc 75 hp turbo diesel capable of 27 km/ liter, with emissions of 109 g/km of CO2. Two equipments are optional: the L and GL. On the entry-level version is already the manual climate, as well as adjustable steering wheel height and a rich set of securitysystems, with both ESP, traction control and seven airbags. With the GL comes more: central locking, sound system with CD/MP3 player and USB socket, electrically adjustable mirrors. 16 ” alloy wheels, fog lamps, privacy glass, Bluetooth system, keyless access and cruise control are optional but are part included in the two packages.

Prices on average for the European market: they starts from 11,000 euros of the 1.2 L 3-door diesel, to 14,000 euros for the 1.3 GL. Optional is the metallic paint with extra 400 € – 1000 € for the automatic transmission, the same extra price is pre-determined for the 4wd that should comes soon. Early next year will be revised even the sports version, according to reports, should keep up the current 1.6 VVT 125 hp of the Swift Sport