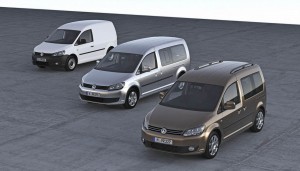 Volkswagen is ready to refresh shapes and contents for the Volkswagen Caddy, this is light commercial vehicle that has undergone to a substantial redesign at the model year 2011. Caddy’s redesign comes with a brand new range of engines and redesigned front – according to the latest Volkswagen’s trends –  horizontal front grille and  headlights style Golf VI. The maximum load volume of the German MPV range from 3,300 liters for the five-door Caddy to 3,900 for the Caddy Maxi, allowing you to completely remove the second row of seats to obtain a greater load area.

Range Engines: Volkswagen Caddy restyling can be ordered choosing between seven petrol/diesel engines with direct injection using turbochargers for improved efficiency that enables fuel savings of up to 21%. The entry level version is represented by the petrol 1.2 TSI, a turbocharged four-cylinder available  from 85 to 105 hp, the 2.0 EcoFuel aspirated (109 hp) with methane wich gets down consumption to 6.6 l/100km km and 154 g /km of CO2. As for the 1.6 TDI diesel, we have 75 and 102 hp. The 2.0 TDI is available in power rating of 110 hp (the only available with 4Motion all-wheel drive), and 140 hp, the list is complete with the 2.0 EcoFuel methane. Do not miss BlueMotion versions using the recovering energy system during braking and the Stop & Start – available for both engine 1.6 TDI. Available also is a six/seven-speed DSG  gears for diesel by 105 or 140 hp.

More changes are the introducing electronic stability control and daytime running lights, the new Volkswagen Caddy is available as startline, Trendline, Comfortline and the new camper/van  version called Tramper. Sales of the new Caddy start late September in Germany, with marketing in the rest of Europe in months ahead. The price list of German Caddy starts from 13,595 euros.