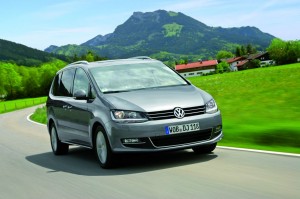 The new Volkswagen Sharan, officially presented at Geneva Motor Show, offers a breath of big news regarding the people carriers segment, this 15 years after first presentation. During these days has already started the German people carrier presale, but you will have to wait for early october to see it in car dealers.

Increasing space: the lenght of the new Volkswagen Sharan increase to 4.85 meters allowing a better comfort, greater load capacity and more space  for the  5-6 or 7 people. The minivan presents its basic model without sacrificing the standard optionals such as ABS, 7 Airbags, ESP and Climatronic automatic climate control.
Functional and fun is the Park Assist of second-generation, through some simple instructions on the screen, allow the new Sharan to enter and exit independently from any kind of parking.

Many models and engines: At launch of the new Sharan are three versions of engines available: 1.4 TSI 150 hp petrol BlueMotion, 2.0-liter TSI gasoline 200 hp and 2.0 TDI with 140 or 170 hp, all with 6-speed gearbox. Three versions will also be for interior: Trendline, Comfortline and Highline. German carmaker will propose in the coming months other versions with dual-clutch DSG automatic gearbox for the 1.4 and four-wheel drive with automatic transmission for the 2.0 TDI 140 hp 4Motion. Prices vary from state to state, runs from about 30,000 euros for the 1.4 engine 150 hp 1.4 TSI Trendline.