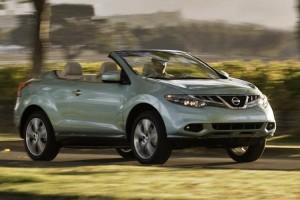 Nissan Murano CrossCabriolet is the first example in auto history of SUV-Cabriolet fusion. There aren’t panoramic roof, roll-bars or struts: this is a genuine cabriolet, derived from the same platform as the Murano “closed”, but with canvas roof and a windscreen only to separate occupants from the outside. Certainly, the new model is inspired by BMW X6 success, the first experiment of SUV-coupe, which is having a good success. The basic mechanism is that of the Murano SUV, whit tin roof removed and replaced with a canvas roof, reinforced chassys to increase the torsional rigidity of the car, in order to compensate for roof absence. The car body is three doors instead of five, and this helps to make the model more attractive. Along with structural changes, the open version of the Murano also features a new design of tail lights similar on certain models like the Nissan 370 Z. As for passive safety in case of rolling out, the rear headrests helds two retractable roll bar that ensures the passengers safety. The Murano CrossCabriolet will be marketed with a unique pack equipment and optional standard are: heated leather seats, Bose audio system with eight speakers that can be adjusted depending on the hood position. But in addition to these comforts, the Murano CrossCabriolet offers the roominess of an SUV without the constraints of a convertible, although the trunk decreases to 215 liters with top down, from 348 liters with the closed roof. Engine is the rather well-known Nissan V6 3.5-liter, 265 hp, paired with the equally famous Xtronic CVT transmission, while the traction is 4×4. Nissan Murano CrossCabriolet will be marketed from the beginning of 2011, but only in the U.S. for now, priced at about € 34,100.