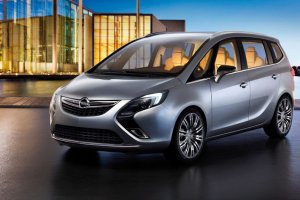 Opel Zafira presents the new Tourer, which after the Geneva exhibition as concept, will debut officially at the Frankfurt Motor Show in September.

The Zafira Tourer, shows a slim aerodynamic to remember “a high-speed train” as Opel folk say, is 4.66 meters long, with a larger wheelbase of 2.76 meters and recalls some new models from the German as Ampera and Insignia from which inherits some technical details.

The third generation of the Zafira with 2.2 million units sold since 1999, offers high comfort for seven passengers, thanks to the Flex7 system which provides the complete seats recline of the third. The second row sofa has been replaced by three individual seats that slide longitudinally and also folds independently. Zafira Tourer features a load volume of 710 liters in the five-seat format (65 liters more than the current Zafira), and up to 1860 liters (+ 40 liters) with all the rear seats folded.

The new Zafira Tourer features MacPherson front suspension as the Insignia and combines torsion beam and Watt’s parallelogram at the rear as on the Astra. Plus it features the active chassis control system FlexRide. Among security devices the adaptive cruise control, the Opel Eye camera, which includes warnings of the passing lane and the blind angle device.

Next post: Aston Martin V12 Zagato unveiled and awarded for its design