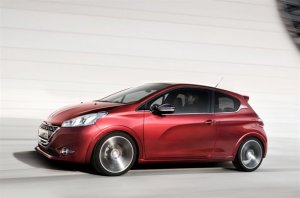 Peugeot will start planning the imminent next month’s Geneva motor show (8-18 march) with the 208 GTi Concept, which will be a star and will anticipate a future production version of the GTi model. Based on the three-door version of Peugeot’s brand new hatchback, the 208 GTi Concept is driven by the four-cylinder, 1.6-litre twin-cam turbocharged engine inherited from the RCZ THP 200 and combined to a six-speed manual transmission.

The Peugeot 208 GTi Concept produces 197bhp and 203lb ft and, although the car maker hasn’t released any official performance numbers, we expect a 7.0 sec 0-100 Km/h time and top speed of 225 Km/h. The 208 GTi Concept will challenge competitors such as the Citroën DS3, Ford Fiesta ST and the 2012 Renaultsport Clio.

The new coupe has a 36mm wider track at the front and rear compared to the standard 208, while rides on 18″ wheels and five-spoke alloy wheels. A rear roof spoiler offers some aerodynamic benefit. Additional cosmetic adjustments include double-chromed exhaust tailpipes, lower bodywork spoilers and lower sill skirt. The new car also has upgrated brakes, with 302mm diameter discs at the front, 249mm at the rear and red-colored brake calipers.

The car features a driver-targeted interior, with a small leather steering wheel and leather gear lever, aluminum pedals and Nappa leather sports seats. The instrument panel comes with dials with a brushed aluminum background and LED lighting. Like the standard Peugeot 208 it is included the internet connectivity.

Peugeot hasn’t yet officially confirmed a production version of the 208 GTi Concept, but the car is expected to go on sale before the end of 2012.

Previous post: The Imminent Unveiling of the Maserati GranTurismo Sport