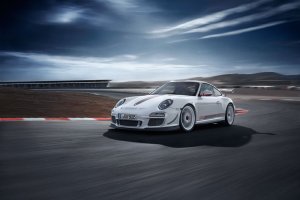 Porsche has released official pictures and specifications of the 911 GT3 RS 4.0, the latest evolution of the 997 GT3. The car utilizes the muscular 6-cylinder boxer naturally aspirated of  the racing GT3 RSR, but the displacement was increased to 4 liters and, thanks to the absence of legal restrictions, the power up to 500 hp (like the turbo version) in combination to a 6-speed manual transmission.

DESIGN: if comaparing the current 911 GT3 RS, changes are concentrated in the new shape of the front bumper with aerodynamic flaps, for first time on a street Porsche. The Photos shared on the web highlights a special white livery with white alloy wheels and roll bar in key-color, while a silver strip with red edges wraps the entire body. The downforce on the GT3 RS 4.0 is 190 kg at full speed thanks also to the large rear wing.

The commercial lauch is scheduled for next July in Germany. The European  average price starts at € 177,000.

Next post: Tata Nano diesel will be most fuel efficient India's Diesel car