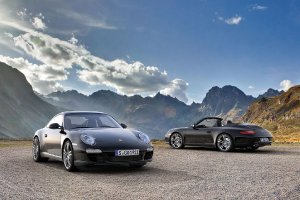 Porsche 911 Black Edition, a special version produced in limited edition of 1,911 units and announced in these days by the German carmaker, will make its debut in April on the whole European market. After the Speedster suitable for collectors, and the GTS for performance lovers, this time Porsche has thought of those who prefer the basic version of the 911.

ALL BLACK: The most obvious peculiarity of this edition is already encapsulated in its name: the body is black (metallic paint is optional) as well as the same color interior are combined with aluminum-colored inserts. The glove compartment shows a label reporting the model name and serial number of the car production, reflecting the limited edition. Even black painted are brake calipers, visible through the 19 ” alloy wheels “911 Turbo II”.

STANDARD OPTIONS: the rich equipment included in the Black Edition series shows some special devices as the Bose audio system with 13 speakers, a subwoofer and a digital amplifier, satellite navigation, parking sensors and cruise control. Among major optionals, as well as comfort features are the dual-clutch automatic gearbox and DKG seven-speed, electronically controlled PASM suspension and brake system with PCCB carbon-ceramic discs.

6 CYLINDERS 345 HP: Porsche 911 Black Edition maintains the same Carrera’s scheme behind the rear axle is, in fact, the same 3.6-liter boxer six-cylinder that develops 345 hp. An engine that pushes the 911 to 289 km/h top speed, allowing an acceleration of 4.9 seconds (which become 5.1 in the case of Convertible) on the transition from 0 to 100, and a declared consumption in average cycle of 10 liters per 100 km.

Among accessories, one of which regards the PDK dual-clutch gearbox (replacing the traditional six-speed manual). The 911 Black Edition is available in both Coupe and convertible body and will be offered from April with prices close to those of Carrera Coupe: € 87,662 and € 98,902 for the Convertible.