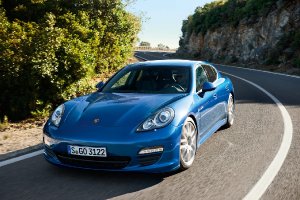 At the 2011 Geneva Motor Show (3-13 March) will debut the Porsche Panamera Hybrid S. The new hybrid supercar should inherit the same propulsive drive of the Cayenne Hybrid, with its V six cylinders in of 2995 cc combined with an electric motor for a total of 380 hp at 5,500 rpm and 580 Nm of total torque at 1,000 rpm.

The Panamera Hybrid S has a top speed of 270 km/h, 0 to 100 km/h in 6.0 seconds and 6.8 l/100 Km in combined cycle with low-resistance tires specially developed by Michelin. Autonomy promises, with electric drive, approximately 2 km with a speed limit of 85 km/h. The driving mode “sailing” allows to turn off the internal combustion engine, up to 165 km/h.

According to the German carmaker, next to the presentation of the Panamera S Hybrid will be the first European debut of Porsche 918 RSR Hybrid concept, the racing version of the 918 Spyder and the Cayman R  with 330 hp.