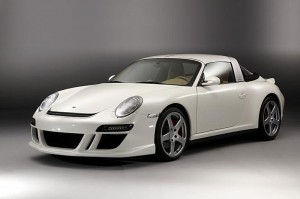 The historic car tuner Ruf, specialist in radical transformation of Porsche models, has created the Ruf Roadster 3.8, on the basis of the modern 911 (project 997), a retro-inspired reinterpretation of the 1967 Porsche 911 Targa. The historical model had a special removable hard top that turned the sports model of Zuffenhausen from coupe to spider. Porsche in 1967, added a opened version to the 911 Coupé 2.0, whose name was inspired by the classic Sicilian competition, the Targa Florio. This particular configuration has remained in the catalog until 1992, with the number 964, before going retired. Later versions Targa, from 993 onwards, are a large coupe with a big cristal sunroof and opening rear hatch. As the old 911 Targa, Ruf Roadster offers a roll-bar fixed arc over the occupant’s heads and a double top panel of carbon fiber that can be removed and folded to put in the trunk. The work of the German tuner includes lowering side windows and the adoption of a plastic sliding rear window held in tension by an electric motor. Consequently, there are four possible configurations: closed cockpit, cockpit completely open, just open top roof or just the rear window opened. The Ruf Roadster is available with the 3.8 liter 6-cylinder engine with 400 hp and 430 Nm of torque, values that allow to reach 295 km/h and get 100 km/h from rest in 4.6 seconds. For insatiable fans, there is also a supercharged version, capable of developing 560 hp. The aspirated version is sold in Europe at an average price of 194,000 euro.