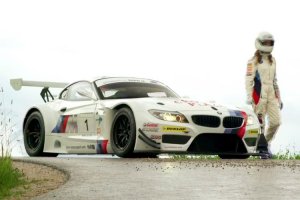 German carmaker BMW has published a video exhibiting a competition between the newest introduction BMW Z4 and the racer BMW Z4 GT3.

Latest success of the Z4 Gt3.

The BMW Z4 GT3, which launched in March of last year, reached its best success so far in January this year.The Team Schubert won the Dubai 24 Hours with Tommy Milner and Edward Sandström, Claudia Hürtgen and Augusto Farfus.

The BMW Z4 GT3 has a steel body with various parts of carbon fiber and reinforced plastic (fenders, hood, roof), it weighs 1,200 kilograms and is powered by a 4.4 liter eight-cylinder engine, while the production version of the BMW Z4 is pushed by a six-cylinder engine. The BMW Z4 GT3 in its racing version boasts a max power of 480 horsepower and is mated to a six-speed sequential gearbox is available at a price of € 315,000 plus local tax.