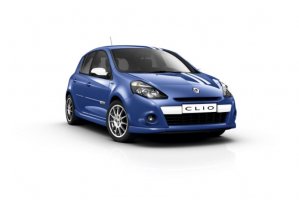 The French carmaker, after Clio Gordini Rs, (Twingo and Wind Gordini) , launches the Renault Clio Gordini which will substitute the package GT in several European markets. The transalpine car will come with the three and five-door body combined to petrol and diesel engines. The main reasons which led Renault to extend the package Gordini to other models is basically due to the success of the Clio Gordini RS, in fact the 27% of the Clio RS is sold in the European market as version Gordini.

The design of the Renault Clio Gordini.

The new Renault Clio Gordini stands with the racing body which shows the blue or white combined with the typical longitudinal stripes crossing all the car, while other bands with white colors are applied on the rear-view mirrors and bumpers. The dedicated wheels of the Clio Gordini are by 16 “, the sides are customized with the logo” Gordini “, while a rear spoiler and side skirts comes color-keyed. To complete the external customization of the Clio Renault Gordini, French designers have added a dual chrome exhaust. The interior of the Clio Renault Gordini features the specific fabrics for seats, black-white-blue leather upholstery to steering wheel and gear lever, dedicated floor mats Gordini, the silver-gray seat belts, sports pedals and lacquered details on the dashboard. The equipment of the Renault Clio Gordini includes automatic climate control, adaptive headlights, rain/light sensors, the TomTom navigation system, radio with CD player and MP3, cruise control.

Among Engines of Renault Clio Gordini a Turbo-Diesel.