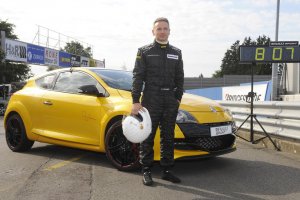 The Megane RS Trophy, the sport version by Renault department limited to only 500 units and based on enhancing of the already powerful RS variant, set a new lap record for a normal front-wheel drive model at the Nurburgring Nordschleife. The latest creation of the atelier Renault Sport, driven by test driver Régie Laurent Hurgon , with only two attempts has covered the long Nurburgring in 8 ’07 “970 on the Renault Sports Day. The record therefore remains at the french home since the previous record belonged to the Mégane R26.R with 8 ’17 ” obtained on 23 June 2008.

The engine of the Renault Megane RS Trophy a 2.0-liter by 360 hp develops 265 Nm of torque and, according to the French carmaker, allow a start from standstill to 100 km/h in 6 seconds and reach a top speed of 254 km/h. The dynamics of the car, to support the performance increase, has been improved with the Cup frame and limited slip differential combined with specific Bridgestone tires.

Renault Megane RS Trophy limited to only 500 units are sold at the price of € 34,000 excluding any taxes that vary depending on the market