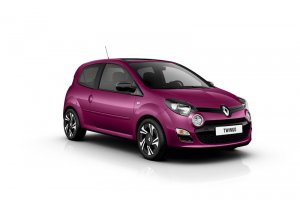 At the 2011 Frankfurt Motor Show of last month, Renault has introduced the new Twingo, which will arrive at car dealers in early 2012. The 2012 Renault Twingo facelift, gets one of Laurens van den Acker’s design concepts, Renault head-chief of the creation department.

The front of the Renault Twingo, is inspired by this new design that stand out the headlights, as well as fog lamps with round shape repositioned near the front grille. In the tail, near the main lights were included the tail-lights. The rear bumper is, however, more surrounding and basically the design is softer. To complete the existing tints range for the body, the French car maker included a Bermuda Blue and the Fuchsia that give a young touch to the new Twingo. The interiors also feature a different customization and differ from the more masculine and sporty versions as the Dynamique, Renault Sport, GT and Gordini, or more comfortable and feminine with the Privilege and Initiale pack. To enable customers to personalize the car have been added five new stickers for the top to the ten already in the list, two of these can be coordinated with the interior.

The 2012 facelifted Twingo will get four engines, two petrol and two diesel: a petrol 1.2 TCE 100 hp, which has a top torque of 155 Nm available from low rpm, and a petrol 1.2 16V 75 hp petrol. Diesel DCI engines range between a 75 and 85 hp. The latter according to Renault offers a fuel consumption of 3.5-L per 100 km, having said that, all engines have been developed to improve efficiency, fuel consumption and emissions. A hybrid or electric version of the Twingo could make its appearance somewhere in 2014, when the new generation is predicted.