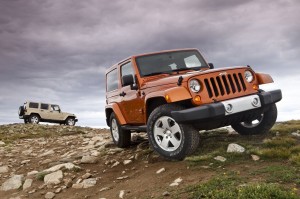 The Jeep Wrangler, off-road icon par excellence, renewed with the model year 2011. The Wrangler remains true to itself as always, the 2011 model maintains the body of the 2007 with new tints, while revised interior design promises Suv’s comfort and accessories . So now the venerable 4×4 received a necessary cockpit upgrade by using soft plastics and top quality materials to cover the dashboard, console and door panels, while have been redesigned the control panel and the dashboard. On the new 2011 Jeep Wrangler, finishing aluminum frames also have been used to the instruments panel and air vents to give a more luxurious style, while the integrated navigation system, heated-electric side mirrors and steering wheel cruise control and radio’s management should make the vehicle more suitable during travel. To better isolate the engine noise and the rolling tire, a greater number of sound-absorbing panels has been incorporated. Overall, the Jeep Wrangler is now a bit “middle-class” but offers more comfort and fancy gadgets, including the USB plug and Bluetooth, but not wasting anything of technical. As already mentioned the new Wrangler offers a new range of colors for the body, new tints are ‘Bright White’, ‘Cosmos Blue’, ‘Deep Red Cherry’, ‘Detonator Yellow’ and ‘Sahara Tan’. Other major news of the Jeep brand will arrive in 2013: there will be a “small” SUV and a media one that will replace both the Patriot and the Compass. Both models will be built on a Fiat mechanic.

The production of the new Jeep Wrangler, which is also available in a 4-door Unlimited version, will begin this week at its plant in Toledo, in the U.S. state of Ohio. The version for the European market will be presented at the Paris motor show, to be sold in subsequent months. Prices should remain almost unchanged, and from about 30,000 euros.