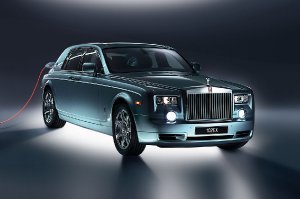 The British carmaker Rolls-Royce works to an all-electric model: the Rolls-Royce 102EX also known as Phantom EE (Experimental Electric), just presented at the 2011 Geneva Motor Show. The prototype created on basis of the huge Phantom, a car with a wheelbase of 5.8 meters and over 3 and a half of wheelbase and driven by a powerful V12, will be for now, more as a test by the virtue of being the first car in this category with electric propulsion.

Rolls-Royce 102EX has been considered the first application of the electric car of super luxury category and it is also the first example of using a battery of such great size and weight (640 kg). Will Reliability and quality meet customer expectations? All questions that the 102EX try to give an answer: by end of year.